Can Printers be thrown in the Trash?

The printer (electronic), which began as an idea of Charles Babbage has gone on to become one of the greatest and useful inventions of all time. What took hours for our ancestors to scribe is now possible and can be done within seconds.

With a tinge of technology, the printer has various operating techniques and purposes, developing to a feat where 3D printing will soon become everyman’s bread and butter.

However, this rapid technological thirst and escalation bring us not only development and daily work convenience but also the vast mushroom of e-waste, which is sadly toxic to the environment. And if this persists then the coming generations may never be able to even imagine the existence of glaciers, uncontaminated soil, and a safe water system.

So, can printers as a waste be thrown in the trash, and if the answer is negative then why and what are the dangers that come with dumping them along with regular wastes? 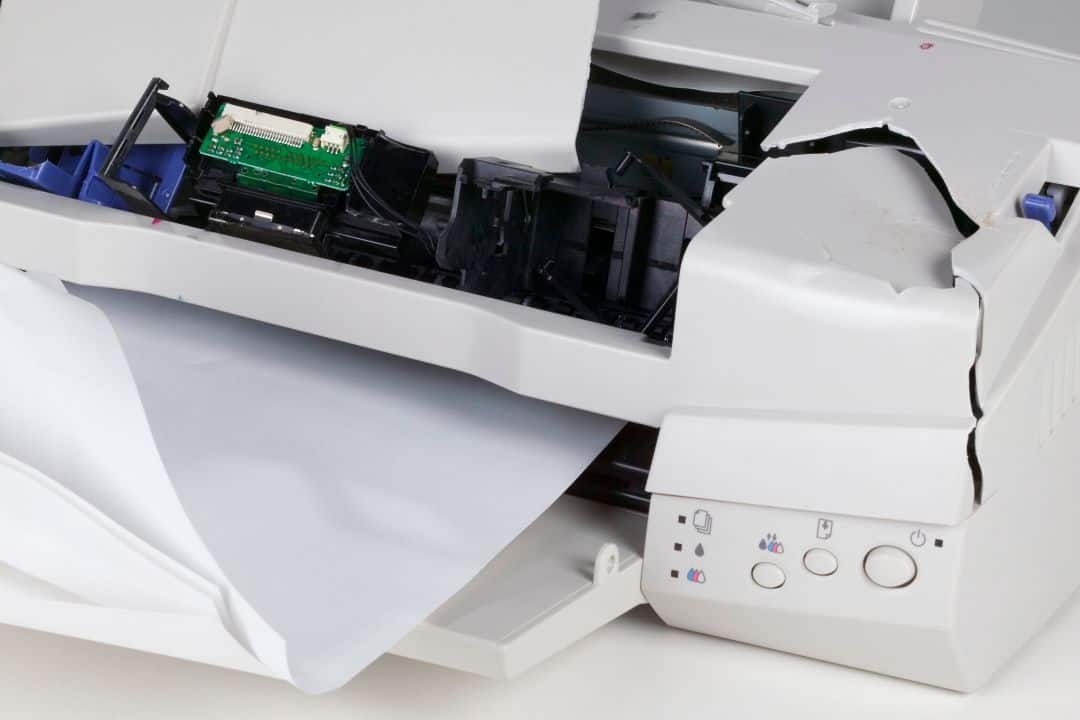 What is a printer?

A printer is an electronic device or output machine that prints texts and images onto a paper of standard size.

It is generally connected to another device such as a computer or phone, from where it receives the information.

As a peripheral, a printer needs to be linked to a computing device, which will provide the graphic or content that needs to be printed. Printers can be classified into two types; impact and non-impact printers.

Printers fall under which waste category?

A discarded printer will be categorized as e-waste.

A printer is an electronic machine; therefore it is not surprising that after they are no longer in use they will become electronic waste. It is globally understood that e-wastes cannot be disposed of with other regular garbage because of its hazardous chemicals and heavy metals, but unfortunately it is widely not practiced.

It has been found that 15% of computer users in the US employ recycling methods while the remaining 85% dispose of their broken computers into landfills.

Despite the statistics being in the case of computers, it can still be expected that printers are also treated in the same manner, especially the cartridges, which have to be regularly changed.

There are various consequences of throwing printers away along with regular wastes. However, we shall look at the threats that could be posed and the consequences that entail through the aspects of the components involved in its manufacture.

What are the manufacturing facets of printers?

There are numerous, each depending on the type of printer. However, here we shall look into the two common desktop printers – Inkjet and Laser printers. And it is also quite known that in 2014, 12.8 million tons of e-waste was the desktop printers.

Inkjet printers create digital images or print out texts. So, it is obvious that these printers consist of electronic hardware.

Let’s take a look into some of its major components and materials used then-
Inkjet Printers consist of a stepper motor that controls the movements of most of the parts.

These stepper motors are mainly made of magnets, copper, wires, stainless steel metal, and silicon steel, apart from other bearings and components.
The printers have a mechanical operation that runs through the help of a small circuit board.

The ink cartridges have a Piezoelectric crystal which enables the stream of ink to break at regular intervals into droplets. The chemical elements of the crystal are Zirconium and Lead in combination with the chemical compound of Titanate.

In cases of a thermal inkjet printer, the type of resistors, like a metallic plate, that is used to control the volume of the ink pressed through the nozzle is generally made of steel. The most common type of resistors contains Carbon that additionally has a Ceramic Insulator coating.

The print heads are commonly made of Stainless Steel that is manufactured using coking coal, iron ore, and scrap. Not to forget that there are nine more metals that can be found in steel, although to a lesser degree.

But it is noteworthy to mention that these contents have traces of Silicon, Manganese, Chromium, Nickel, Tin, and Zinc, along with other insignificant amounts of Molybdenum, Tungsten, and Vanadium.

In some cartridges, like with HP, its contents also have precious metals like the Palladium or Gold.

The spongy material in the ink cartridges contains a hydrophobic foam that is made of synthetic, porous rubber. The other reservoirs like the polyurethane foam are made from the materials of polyol, isocyanate, and water.

The casings of the ink cartridges are mostly made of an engineering-grade plastic polymer. The compounds from the raw materials are hydrocarbons whose end result is plastic, having a very slow decomposing rate.

Ceramics like Silicon Nitride and Carbide are also used in inkjet printers. Alumina ceramics are used on the circuits to give good heat resistance.

Now, unlike the inkjet printers, the Laser Printers use Toners to create their texts and images.

These toners are basically made of powdered plastic. The photocopiers in the laser printers have a rotating drum in it which is Selenium coated. And, as all chemistry and science students may know, it converts light into electricity. In simple words, it behaves like solar cells.

Iron Oxide is also present inside these printer toners, which makes them magnetic. Not to mention the other refinements and additives that also adds up to their contents. Here are some basic additives that go into making a commercial toner:

There is about 85% to 95% of plastic presence in the toners. Inhalation of these tiny airborne particles can lead to numerous lung complications.
To melt the toners into the pages, solutions like the polypropylene wax is used for lubrication purposes.

To make the texts or images to be printed, manufacturers use Carbon Black in the toners. It is basically soot of high-purity and commonly made of creosote or burning tar. Mind you this same carbon black is also used to make rubber products like tires toughen up.
These printers also come with separate color cartridges that make up the color hue for color printing.

The compounds and pigments that are involved in producing these colors are Benzimidazalone, Quinacridone and Copper Phthalocyanine.

To achieve a silky flow and avoid a cakey finish of the finished printing, microscopic glass beads are added on the toner surface.
The charge control agents that are used to give off a static charge so that the toner clings well to the imaging drum contains bits of added Chromium, Zinc or Iron.

How can you recycle printers?

Well, as mentioned above, there are a lot of risks to humans as well as the environment if printers are not disposed of correctly. It is never the best measure but also a legal duty to dispose of any electronics, the printer, in this case, the right way.

Since the equipment contains harmful and toxic substances that are hazardous and damaging in every sense of living.
There are basically three alternatives for the disposal of printers:

So, without any further ado, let’s look into them – 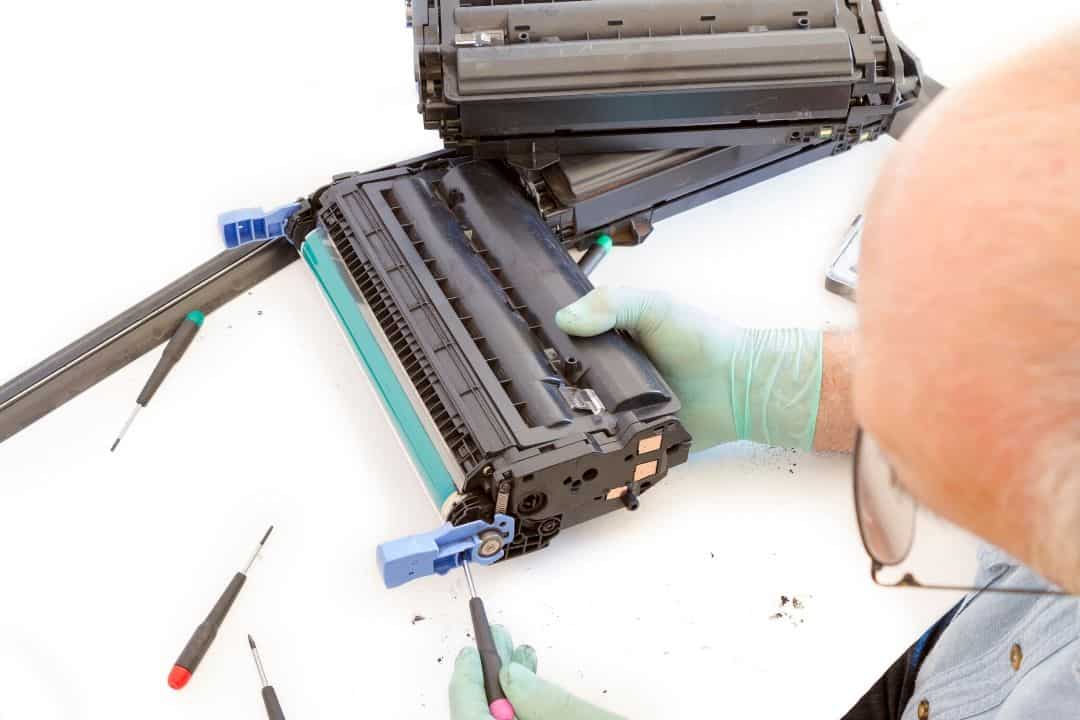 Recycling the printers is the quickest and easiest way to reduce the carbon footprint. Many major stores and chains have adopted the recycling programs so the only work here is to find one and put the printers in the designated place.

Or recycle it through the e-waste collection center. Most states are equipped with a center, so find the city hall or the county website for the drop-off location and time.

Both the printers and the cartridges can be recycled. Yes, cartridges also need to be equally recycled, as research has shown that it takes 500 years for an average laser cartridge to decompose if thrown into landfills.

And also, remember to remove the ink cartridge beforehand. The ink cartridges may be smaller in size but as waste, they are equally toxic to the environment.

Therefore, it is crucial to segregate the printer and its cartridge when they are no more in need, as they will require different recycling processes.

Donating is another way to dispose of the printers. It may be useless to one man and a treasure to another. Especially in recreation centers, thrift shops, non-profits, schools and charities, the donation may come in handy.

Donating to organizations that do electronics outreach programs also is a noble option. These organizations, in turn, provide it to other developing countries, either in parts or whole. You can find such needs of the organizations on their websites.

Selling the printers is a win-win for both the seller and the buyer. You can check to see if some outlets and shops accept the types of printers at hand. It can be difficult to sell printers but you can always have a fair bargain in buying a new one if you succeed in selling.

No harm in trying anyway. Some places may not take the printer as a whole but in parts so do take notes of what can be a selling material. For example, valuable resources such as copper in the cords and circuit boards of printers can be re-sold.

US States where printers are banned from the trash

Out of the 50 US states, California, Illinois, New York State, Vermont, and Wisconsin are the ones that have completely banned the dumping of printers in the trash can.

This includes the prohibition of disposing of printers in landfills and incineration of printers.

However, it is to be noted that there are certain cities and towns that have dedicated themselves to a better future by employing recycling techniques and campaigning the ban of incinerating and disposing e-waste into landfills.

It has been found that there is 2% of e-waste out of the total municipal waste that represents more than 70% toxicity in America.

In this fast-paced world, the growth of e-waste is inevitable. However, every wise decision made can help bring change. The misconception that printers are not as hazardous as laptops and mobile phones has only led to more damage to the environment.

Therefore, printers should not be thrown in the trash. Instead, it can be recycled, donated or even re-sold.

Through this, there will be conservation of resources, chemicals will not seep into the soil or water system, and the air we breathe will be a few steps away from getting worse.